We hope you’re all enjoying the stunning colours of Autumn. Living in Devon, it’s hard to say which is my favourite season but this one usually always vies for my top prize each year.

Recognizing the season we’re in, both climatical and financial, is a key to being correctly prepared. We’d think it foolish to partake in a snowball fight dressed only in shorts. Likewise, it is foolish to enter a market just as the bubble is about to burst. But, oh for retrospect.

Within this month’s round-up we’re going to look at 3 key events. But, unusually, the first of these is going to be in the past, because seasonal knowledge and hindsight truly are wonderful things:

1) What Goes Around Comes Around

This month, marks the 30th anniversary of Black Monday, an event which no millennial will have experienced: “On this day (19th October), 30 years ago, stock markets around the world suffered a collective heart attack. There have been plenty of grim times for markets since, such as the three years during which the FTSE 100 fell after the dot-com bubble burst, or the precipitous fall between late 2007 and early 2009 as the global financial crisis struck. Yet “Black Monday”, on the 19th October 1987, remains ingrained on the folk memory. 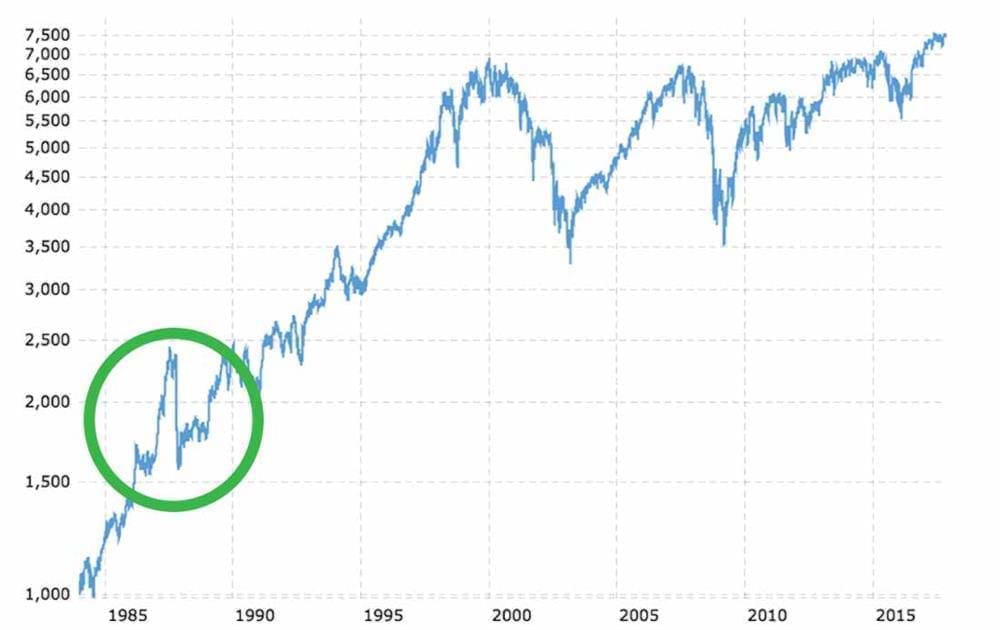 The 10.84% fall that the FTSE-100 suffered that day and the 12.22% fall it endured the following day remain the biggest one-day falls, in percentage terms, that the index has suffered in its 33-year history – far worse than any of the murderous one-day declines that the index suffered at the height of the crisis in 2008.” (Sky News)

But, this surprisingly well-written article raises the point that Black Monday still looms large for a number of reasons. I’ve summarised them here for our readers:

However, Ian King, Business Presenter, discusses the fact that “what caused Black Monday remains a matter of debate. One of the big long-term factors that had supported the markets over the previous two years had been co-ordinated action by the world’s biggest governments, the US, Japan, West Germany, Britain, and France – this was before the collapse of Communism and the rise of China, of course – to bring down the value of the US dollar and then stabilise it. This had sparked a US export boom and had been generally good for global growth. However, by October 1987, co-ordinated action was coming to an end. West Germany raised interest rates – this, of course, was a time before the euro – and Jim Baker, the US treasury secretary, had started to murmur that the dollar was again becoming over-valued.” (Sky News)

Does any of that sound familiar? It should. This provides the perfect segue into the second key headline to watch for October.

“Britain’s economy unexpectedly picked up speed in the three months to September, putting the Bank of England firmly on track to raise interest rates next week for the first time a decade.” (Investing.com, 25th October 2017) “Scotiabank economist Alan Clarke called the latest 0.4 percent growth figure “hardly a boom… merely in line with potential”. Nevertheless, “it removes the last hurdle standing in the way of a rate hike at next week’s meeting,” he said.

A Reuters poll published on Tuesday showed the Bank is widely expected to raise rates to 0.50 percent from 0.25 percent on Nov. 2, due to concerns that the economy cannot grow as fast as it used to without generating excess inflation.”

Plus, “There are also signs that the post-crisis co-ordinated action among central banks is coming to an end. The US Federal Reserve raised its main policy rate in December 2015 and has since done so on three more occasions. The Bank of England looks set to raise interest rates here for the first time since July 2007. And even the European Central Bank, amid signs of a recovery in the Eurozone, may begin to tighten monetary policy. The era of ultra-cheap money appears to be coming to an end.”

Oh, but wait, this last paragraph was written by King, as he explained the pattern between the pre-Black Monday economics and today’s financial landscape, linking both the first and second headline right back to what’s going to happen ahead of us in the financial markets.

3) How Can Gold be both hot and cold?

The third point paints a stunning picture of the truth below the headlines. A remarkable thing is happening in the Gold market. “While virtually no one was looking, a number of annual gold contracts traded on the COMEX reached a new historical high on October 20. With over two months to go.” (GoldSilver.com) This refers to the trading of Paper-Gold.

And yet, on the other hand, “The first nine months of 2017 have seen demand for gold coins slump. As stocks soar unendingly the US Mint notes that sales of coins is at its weakest in a decade as complacency in the face of ever-increasing potential-crisis-events nears record highs. The question is – what happened the last time the public gave up on buying “protection against the idiocy of the political cycle”? The answer is awkwardly simple… everything collapsed.” (Zerohedge)

But, how can it be both? The answer is very plainly that paper-gold is overpriced while physical gold is underpriced. What a great time to be awake to the attractiveness of Gold, when the larger majority are asleep? One of the best times to enter, or continue to pursue, a market is when it goes it slumps; when prices are low. The old adage “buy low, sell high” is as true for real assets – such as physical gold – which base their “value” of the craziness of paper assets of the same name – Gold trading funds.

The first and last thing I can see from my window is miles of view across Dartmoor every day. From here, I can see if light rain, a thunderstorm or even snow, are coming my way, even while the sun shines bright, usually an hour or so before they arrive. Oh the joy of knowing the seasons, knowing how to dress in good time and being prepared.

I’m not sure another collapse will be as quick and stark as Black Monday, maybe it will be slower and creep up on us, more like a Black 2018. But either way, the reality behind the headlines are just the same. Physical Gold is a store of wealth in times of difficulty in the stock market. Call one of the Bleyer Team on 01769 618618 or email sales@bleyer.co.uk to ask for a member of the team to call you at a time convenient to you.

5 Interesting Facts about Investing in Silver The Origin of Money: A Brief History
Search