Gold settled higher for a second straight session on Friday, logging its highest finish in more than three-and-half months, and for a fourth straight week of gains, as the metals complex was boosted by a softer dollar.

Haven demand rose amid growing concerns about geopolitics and the Federal Reserve’s lack of commitment to lift benchmark interest rates also helped to support higher prices in the precious metals.

The firm gains for the metals came as the dollar softened on indications U.S. President Donald Trump’s tax and other pro-business policy plans would be implemented at a slower-than-expected pace.

“Traders are starting to find out, however, that the speed of government is a lot slower than the speed of business let alone the speed of markets,” said Colin Cieszynski, chief market strategist at CMC Markets, in a note.

Growing concerns about coming elections in the Netherlands, France, Germany and Italy, where populist parties threaten to upend the status quo in the European Union, also are fostering anxiety among investors. Gold tends to benefit when political uncertainty rises.

Those factors combined with a Fed that some investors have read as reluctant to move too quickly to raise interest rates, so far have created a bullish atmosphere for gold to advance. Higher rates usually undercut the appeal of precious metals which don’t bear a yield.

“This has impacted through forex and commodities with key upside moves on [the
British pound] GBPUSD, -0.2167% gold and silver,” said Richard Perry, markets analyst at Hantec Markets, in a note.

Specifically for gold, Perry said the recent moves higher have opened up more upside for the metal. 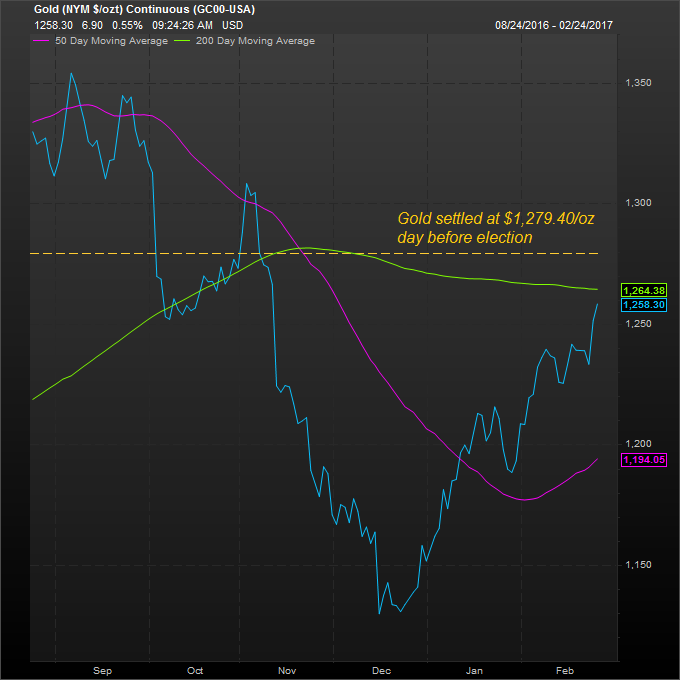 Gold is just a few bucks away from breaking through its 200-day moving average at $1,264.38, according to FactSet, and has recovered to within less than 3% of its price just before the November election. Market technicians often use moving averages to help to determine whether an asset is experiencing a bullish or bearish trading trend.