Gold And Silver’s Drop Has Hit Precious Metals Investors Hard – Is It Time To Buy?

But there were some green shoots for gold bulls as evidently physical demand in China and India both started to pick up signified by rising premiums in the physical gold market. While it didn’t make up for the drop in both the speculative and ETF bullion sales, it is an important factor we look at as it can change the short-term bias of gold traders and obviously soaks up gold inventories.

About the COT Report

The COT report is issued by the CFTC every Friday, to provide market participants a breakdown of each Tuesday’s open interest for markets in which 20 or more traders hold positions equal to or above the reporting levels established by the CFTC. In plain English, this is a report that shows what positions major traders are taking in a number of financial and commodity markets.

Though there is never one report or tool that can give you certainty about where prices are headed in the future, the COT report does allow the small investors a way to see what larger traders are doing and to possibly position their positions accordingly. For example, if there is a large managed money short interest in gold, that is often an indicator that a rally may be coming because the market is overly pessimistic and saturated with shorts – so you may want to take a long position. 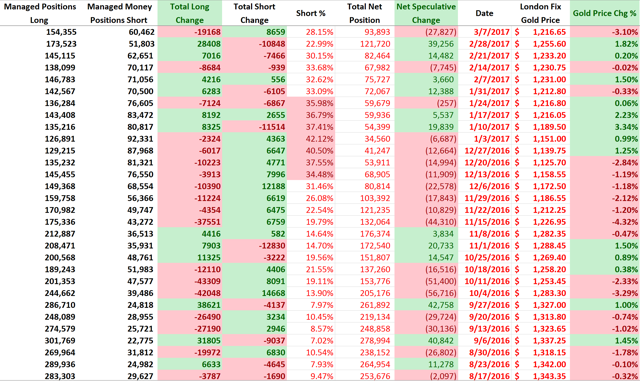 This week’s report showed a decrease in speculative gold positions as longs shed 19,148 contracts during the COT week while shorts added 8,659 contracts to the gross speculative short position.

Gold’s dismal week has investors asking what’s after March hike The New £1 Coins – What are they really worth?
Search