Janet Yellen’s soothing words on the pace of U.S. interest rate hikes were a day late for hedge funds losing faith in the metal.

Money managers cut their bullish bets on bullion by the most since 2015 in the week ended March 14. The next day, Federal Reserve Chair Yellen reiterated that monetary policy will remain accommodative for “some time,” easing market fears that there might be more than three rate hikes this year. Her words sparked the biggest gold rally since November.

Gold, which climbed through the first two months of the year, had foundered in March as the prospect of higher borrowing costs curbed the appeal of non-interest-bearing assets. Yellen’s remarks came as the Bank of Japan maintains its unprecedented monetary easing program and the Bank of England holds its benchmark rate at a record low, helping to keep yields on trillions of dollars worth of debt below zero.

“The fact that we still have stimulative measures, the fact that we still have negative rates out there — that generates uncertainty in people’s minds,” said George Milling-Stanley, the head of gold strategy at State Street Global Advisors, which oversees $2.47 trillion. “There’s still an awful lot of things out there that are supportive of gold in the short- to long-term.”

The funds reduced their gold net-long position, or the difference between bets on a price increase and wagers on a decline, by 47 percent to 49,835 futures and options contracts in the week ended March 14, according to U.S. Commodity Futures Trading Commission data released three days later. That was the biggest decline since December 2015. 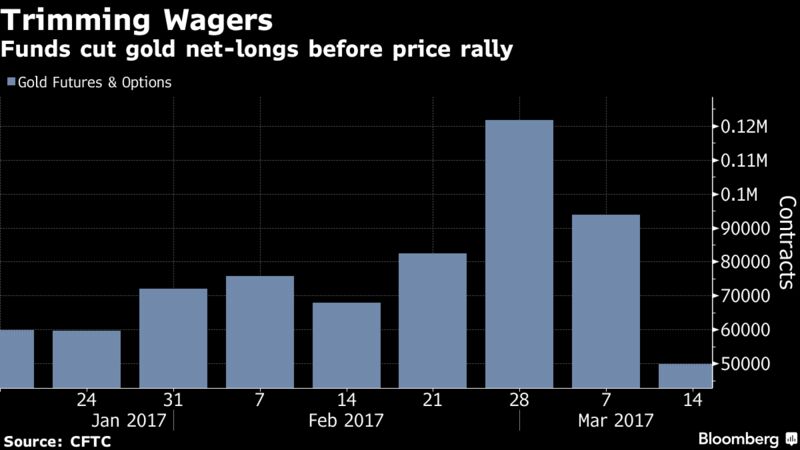 As traders awaited the Fed meeting, gold futures in New York dropped in the first part of last week. Yellen’s statement on March 15 then reversed those losses, sending the metal up 2.5 percent to $1,230.20 an ounce at the close on March 17, the biggest two-day gain since Nov. 2. Prices added 0.2 percent on Monday to $1,232.80.